The parking lot at Cardinal Glennon Children’s Hospital in St. Louis, where a security guard was hit by a vehicle and a man suspected of breaking into cars was shot and killed by security on Wednesday, October 20, 2021 Photo by David Carson, dcarson @ post-dispatch.com 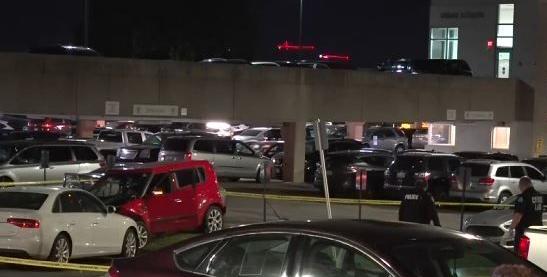 UPDATE at 9:50 a.m. Thursday with the name of the deceased man

Police said the guard was investigating two people in a red Kia who were on the hospital grounds in the 1400 block of South Grand Boulevard at around 1:10 a.m.

The Kia then hit the guard, knocking him to the ground, and the guard fired shots into the car, police said.

The Kia then struck a car parked in the parking lot. The Kia driver fled the car but was found on the street about two blocks south of the hospital with a gunshot wound to his chest. He was taken to hospital and pronounced dead.

Police identified him as Anthony Smith, 32, of the 5500 block of Alcott Avenue on Thursday.

A 26-year-old Kia passenger also attempted to flee from the scene but was taken into custody, St. Louis police said.

Police then referred the charges against the woman to prosecutors, but she had not yet been charged by 4:20 p.m.

The security guard was left in critical condition and was considered unstable Wednesday morning.