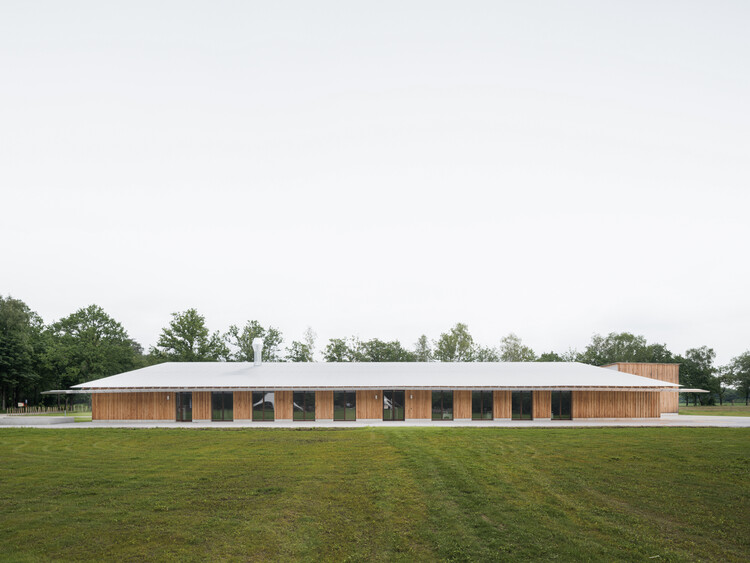 Royal, enduring and wild. Studio Jan Vermeulen, in collaboration with architects Tom Thys, has developed a master plan for the landscape infrastructure of the main entrance and designed a new visitor center which replaces the existing outdated buildings in Prinsenpark. Prinsenpark is a landscape park in the Campine Nord of Antwerp.

Originally established in 1880 as the grounds of a royal estate that was never built, the park has become a unique reserve with a clear focus on access to nature and education. In 2021, the park won an international Green Flag Award for its “sustainable vision, beautiful facilities and wide range of educational activities”. The unique identity of Prinsenpark has developed over 140 years and is defined by the strong combination of the formal structure of the original royal park and its wild flora.

The park nestles like a precise and defined figure in the landscape. An oval trail circles the central forest with its formal structure of meandering paths and paths that provide access to the park. The extension of these woods sometimes merges with the surrounding landscape, sometimes they bring a contrast. This creates an intriguing bocage landscape around the Oval Forest in which open and closed views alternate.

A picturesque set. The new center brings together the administrative offices of the parks, its forest depot and its workshops, as well as the reception facilities in a set of two buildings with sloping roofs. Between the Kastelse dike which cuts the landscape in a long straight line, and the edge of the oval wood, two volumes define an enclosed space which serves as a courtyard for the foresters. Wide sloping roofs overhang to create an entrance, a covered outdoor space or a protected work area. Reminiscent of the 18th century experimental farms that developed in this sector to cultivate this former bog, the particular geometry of the building generates a variety of silhouettes.

As in a picturesque whole, the relationship of the project with its surrounding landscape is on several levels. An aspect reinforced by new paths, clearings, channels and rainwater retention basins which anchor the project in a natural way. “Wood-clad buildings have a rural expression, but the precise detailing around the windows, gutters and gates transcends the utilitarian. Large pitched roofs overhang to create an entrance, covered outdoor space or protected work area.

Sideboard. The first building, the Visitor Center, includes visitor facilities, offices, the canteen and changing rooms for park staff. The second building contains depots and workshops for foresters. An allegory of the regal yet wild landscape of Prinsenpark, the new project combines elements of local building culture with the formal plan of a country house. The visitor center has been laid out as a row of rooms and halls under a large sloping roof that overlooks the oval woods.

A succession of large rooms and smaller intermediate spaces allows a varied use in which different spaces can contain different activities. Large window and door openings connect the information desk, reception area and training room with the offices, staff canteen and central courtyard, and make the operational activities of Prinsenpark visible to visitors.

A refined casco structure. Wood-clad buildings have a rural expression, but the precise detailing around windows, gutters, and doors transcends utility. The identity of the project is defined by the rhythm of the lightly abraded larch planks that wrap around the volumes as rain and windscreens. The roof structure with its corrugated panels in untreated aluminum and its exceptionally large V-shaped gutters bring more refinement to the project. Rooms and halls are constructed with white concrete blocks and beams forming a sturdy, neutral backdrop for park activities.

Built with a small budget, the project is an intelligent and flexible structure where the construction elements closer to the user obtain more detail and refinement. Light walls clad in wood, custom doors and windows and fixed furniture, tinted in deep blue, green and purple, contrast subtly with the concrete blocks and prioritize the enfilade. The depot and the workshops are grouped together in an L-shaped building which encloses the central courtyard. A series of galvanized steel gantries defines a modular covered space for the storage of forestry equipment.

A balanced ecosystem. In various ways, the project focuses on integrated sustainability. The visitor center’s large roof overhang not only creates a social space for visitors, but also serves as passive solar shading for the large spaces along its main facade. Construction assembly methods of various construction elements allow for easy disassembly, reuse or recycling. In this respect, the building acts as a bank of sustainable materials for the future.

The visitor center also meets the passive house standard. Water management is used as an educational element and connects the project and the landscape in a new ecosystem. Existing canals and ditches have been adapted into wadis to create a landscape of water and infiltration where new flora and fauna can flourish. The biodiversity of the site thus receives a new impetus.

Rainwater is collected in tanks and basins via long V-shaped gutters and spouts before overflowing into the system of natural landscaped retention areas. The trajectory of the water is visible to the visitor. Wastewater is filtered and purified by an independent system before being returned as clean water to the landscape. Various housing options have been incorporated into the facade of the workshops to accommodate the local bat population. The building contributes to the values ​​and vision of Prinsenpark as a space where nature, culture and recreation are intertwined in a special and balanced ecosystem.