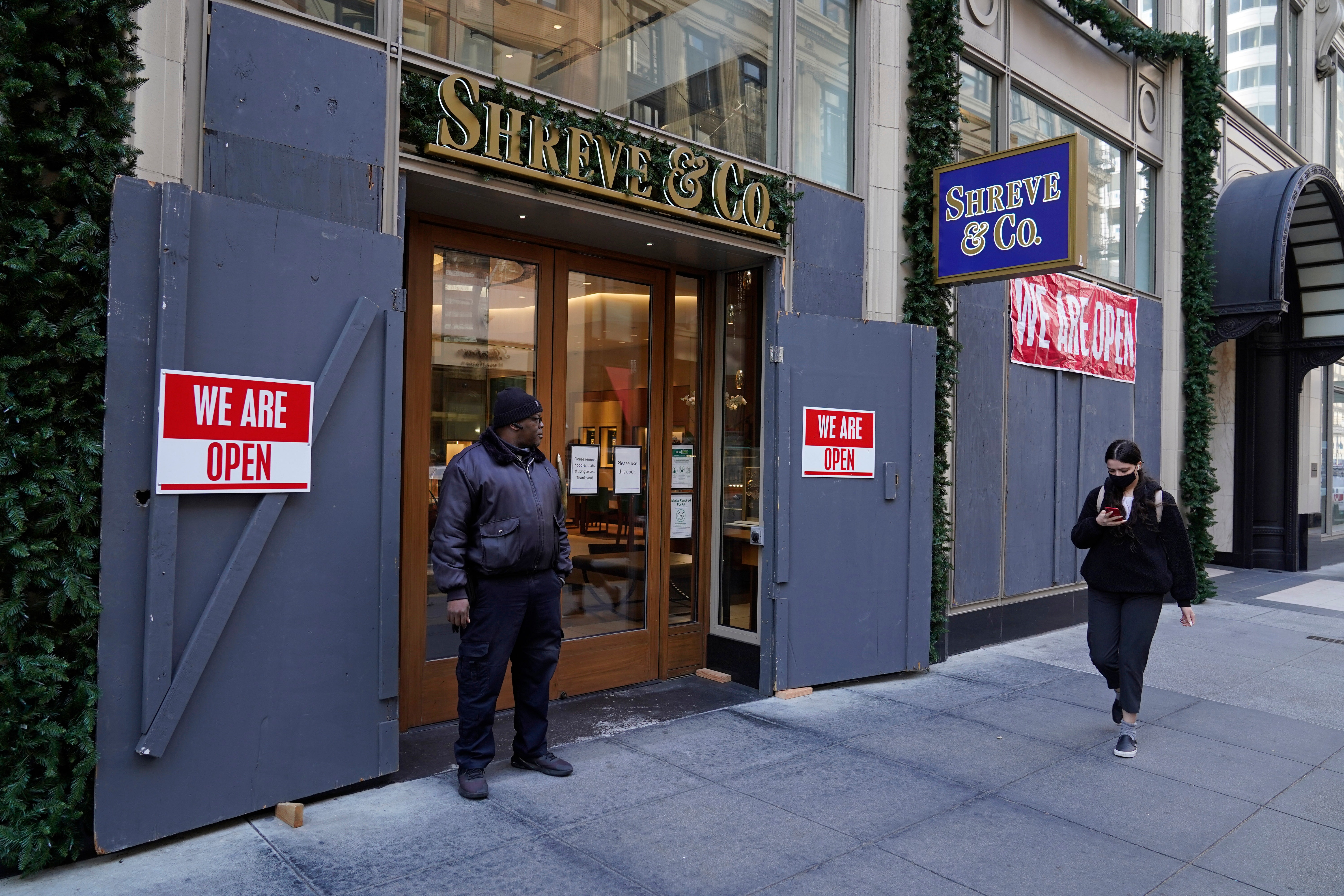 Politically liberal San Franciscans are used to living side by side with open drug use, excrement infested streets and petty crimes. But an upsurge in break-ins and brazen shoplifting makes some locals feel the city they’ve fallen in love with is in decline.

Caitlin Foster is one of the San Francisco merchants who have had to repeatedly remove used needles and other drug-related paraphernalia outside the bar she manages. And after too many meetings with armed people in crisis, the affection of the Seattle transplant for his adopted city has soured.

Caitlin Foster stands outside the Noir salon she runs in Hayes Valley and talks about the declining quality of life in San Francisco on Thursday, December 2, 2021. (AP Photo / Eric Risberg)

A male beggar in a wheelchair, with open wounds on his legs, walks past the Powell and Market Street cable car bend in San Francisco on Thursday, December 2, 2021 (AP Photo / Eric Risberg)

“It was a goal to live here, but now I’m here, and I’m like, ‘Where am I going to move now?’ I’m done with that, ”said Foster, who runs Noir Lounge in trendy Hayes Valley.

A series of headline-grabbing crime stories – crowds of people smashing windows and grabbing luxury handbags in the downtown Union Square shopping district and daytime shootings in the Haight-Ashbury tourist district – has only exacerbated a general feeling of vulnerability. Residents are waking up to news of attacks on older Asian Americans, burgled restaurants and boarded up storefronts in the city’s once bustling downtown core.

The pandemic has emptied parts of San Francisco and highlighted some of its drawbacks, including a laissez-faire approach from the authorities to open up the drug trade just steps from the Opera House and Symphony Hall. Parents were in despair as public schools remained closed for most of the past year as neighboring districts welcomed children into the classroom.

A tent is seen on a sidewalk just around the corner from the Opera House with a residential building in the background in San Francisco on Thursday, December 2, 2021. (AP Photo / Eric Risberg)

“There is a widespread feeling that things are on the wrong track in San Francisco,” said Patrick Wolff, 53, a retired professional chess player from the Boston area who has lived in the city since 2005.

San Franciscans will vote in June on whether to recall District Attorney Chesa Boudin, a former public defender elected in 2019 who critics say is too lenient on crime. His supporters say there is no upsurge in crime and that corporate wage theft is a more pressing problem than that of a San Francisco woman finally arrested after stealing more than $ 40,000 in goods to a target in 120 visits.

“Where’s the progress? If you say you’re progressive, let’s get the homeless off the streets and give them mental health care,” said Brian Cassanego, a native of San Francisco and owner of the salon where Foster works.

Cassanego moved to the wine country five months ago after going out one day to find a man who “looked like a zombie”, with his pants down to his knees and bleeding where a syringe was stuck on his hip. . A woman screamed nearby in shock.

“I went upstairs and said to my wife, ‘We’re leaving now! This town is over!’” He said.

While crime as a whole has been on the decline for years, reports of shoplifting – shoplifting from a person or business – have increased by almost 17% to over 28,000 compared to the same period last year. Requests to clean dirty streets and sidewalks make up the majority of calls to 311, the city’s service line.

Elected officials say they are grappling with deep societal pains common to all major American cities.

People walk past a female beggar in a wheelchair near Union Square in San Francisco on Thursday, December 2, 2021. (AP Photo / Eric Risberg)

A high percentage of about 8,000 homeless people in San Francisco are struggling with chronic addiction or severe mental illness, usually both. Last year, 712 people died from drug overdoses, compared with 257 people who died from COVID-19.

LeAnn Corpus, an administrative assistant, said a homeless man set up a makeshift tent outside his house using a bicycle and a bed sheet, and relieved himself on the sidewalk. She called the police, who arrived after two hours and evacuated him, but at her aunt’s house, a homeless man camped in the backyard for six months despite attempts to get authorities from the expel.

In Hayes Valley, business owners tired of the garbage strewn about and the city doing nothing to fix the problem have banded together to rent closed garbage cans from a private company, said Jennifer Laska, president of the neighborhood association. .

After the lease expired, the association managed to get the city to agree to purchase and install new public trash cans designed to keep garbage inside and looters out. It was four months ago.

“We still have a hard time buying the trash,” Laska said.